I moved to Delhi and rented a terrace home so that I have a sky to look up to. After nearly two years of star-gazing, I sat up on my bed one day and spread out in front of me my exploits so far. They were pathetically few — a job that sustained me alright but provided much less by way of intellectual stimulation, a couple of pals whom I can text any night and pour out my grievances as well as joy, a handful of books I managed to read, quite a few romcoms and superhero stuff I binge-watched, a lot of time which I idled away, and Bikas, my cycle rickshaw-wala and loyal friend, who ferries me through rain and shine.

While my eyes were hooked to the sky, back at home, three Eids have gone by, two weddings and numerous occasions for family get together, moments of which they’ve sent me enough photographs. That day, when I sat in my bed, I asked myself if I missed any of them. It was hard to say yes. It was hard to say no either, for I did miss a wrinkled, weather-beaten face with two sunken eyes that would melt at the first sight of me, and two hands with coarse, gnarled fingers that would run through my hair, filling me with a calmness that I could find nowhere else.

“One Umrah and a facial palsy later, her favourite pastime nowadays is to threaten everybody that her time is up,” chuckled my cousin sister over the phone some days ago. I laughed with her, but a pang of pain had tugged at my heart then.

I recollect an instance, one among many in fact, that happened decades ago. A girl aged seven, dressed in a banyan, trousers and a duppatta wrapped around her small frame for a sari; another shawl pleated and fastened to her hair at the back; a book in one hand and a stick in another, quizzes her granny:

“Vallyumma (granny), what is the biggest living being on earth?”

“Repeat after me. Neela thimingalam.”

“Neela meenkalam (vessel in which fish is cooked).”

I had spread the word to each and everybody who came by and all had had a hearty laugh.

On numerous occasions, at different stages of my life after graduating to adulthood, I have often tried to figure out what she must have felt at those moments. Did she feel stupid? She had laughed with us. Her fondness for her granddaughter hadn’t diminished one bit. But did our laughter peel off a layer of the last remains of her fading youth? I don’t know. 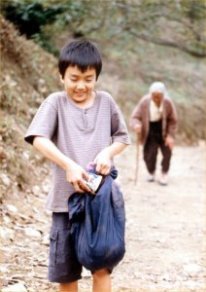 They say a good work of art can transcend barriers of time, language and geography, and connect with audience anywhere any time. If that is the criteria, Lee Jeong-hyang’s 2002 movie Jibeuro (The Way Home) is a howling success. A much celebrated work back then, the movie had fetched Lee the South Korean equivalent of an Oscar, and was the second highest grosser that year.

The Way Home is the charming story of seven-year-old Sang-woo and his grandmother. When Sang-woo’s mother had to shut her business and hunt for a job, she literally drags her city-grown son to her mother’s home in the countryside. The spoilt-yet-adorable brat rebels by snubbing the mute septuagenarian, calling her names, throwing away her shoes, breaking her pot, stealing her hairpin to buy batteries for his game.

But his granny’s tireless, uncomplaining affection for him changes the nature of Sang-woo’s relationship with her. From someone who refuses to eat the country chicken she cooked when he demanded ‘Kentucky chicken’, Sang-woo gradually transforms to a boy who takes care of his sick granny. By the time it is time for him to depart, he begins to worry how he would know it if she falls sick. He creates postcards with crayon sketches of his granny’s sick and happy faces, so that the unlettered could post them to convey if all was well with her or not. There are numerous instances and subplots that keep you hooked, make you smile or go ‘tch’.

Lee dedicates the movie “to all grandmothers in the world.”

A placid, free-wheeling, linear story that stays with you long after you watch it. I revisit this gem of a movie whenever I need a little booster. It transports me to a time when love came without conditions, attention came unasked as if it was a birthright, mischiefs did not break ties, sentences could be uttered without a second thought, laughter was routine, and world in general was safe and sound. It reminds me of an inexhaustible source of love, which shaped my virtues once and continues to fuel them even today, though I have broken off and drifted away from it afar.

One thought on “How I find my way home”